All high-rise, low-rise and street developments in areas other than the CBD and North Adelaide. Includes Port Adelaide and Glenelg.
Post Reply
669 posts
Message
Author

Looks decent enough, hopefully they will deliver in the materials used. It will be interesting what sort of tenancies take up the ground floor food court spaces.

It will also be nice to have this area filled out now. This is a massive block!
Top

Bacon wrote: ↑
Fri Apr 03, 2020 9:01 am
With the Target gone I wonder how this changes the Aldi plans? Wouldn’t make much sense to build when you have a huge vacant space next door.

It looks like they're putting something there. They're building a new entrance to that site.
Top 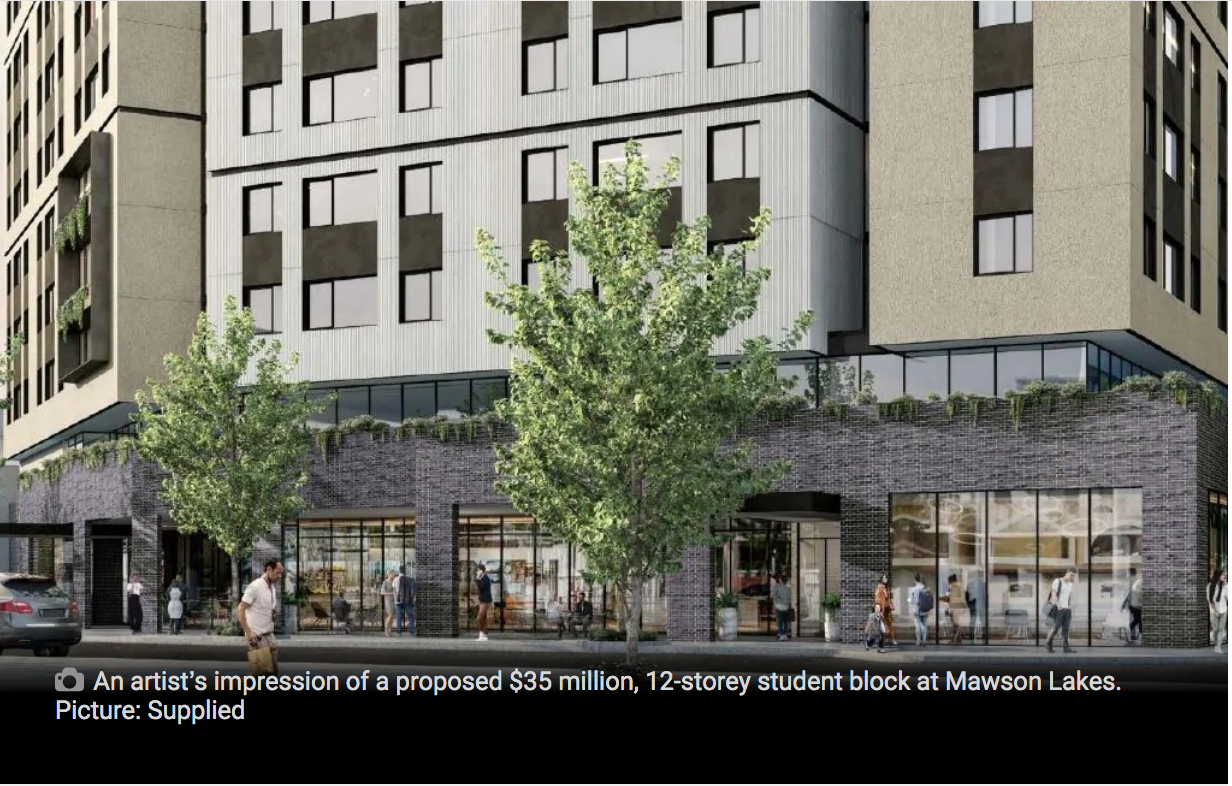 A developer has lodged plans for a $35 million, 12-storey apartment block for overseas students at Mawson Lakes.

New South Wales-based Michael Calabro is seeking permission from the State Commission Assessment Panel (SCAP) to build the tower on the junction of Capital St and Metro Parade.

Mr Calabro has engaged Adelaide company Future Urban to manage the project, which – if approved – will create the highest building in northern Adelaide.

A previous attempt by another developer, Frank Barbaro, to build a $30 million eight-storey apartment block on the 2556sq m site failed to proceed.

In his application, Mr Calabro said his building would have 405 beds, a publicly accessible food court, two retail tenancies, an underground carpark and various student amenities.

Those included a gymnasium, library and communal areas.

“As it stands, there are approximately 38,000 international students enrolled in South Australia yet only 5419 beds are available within purpose-built student accommodation,” it said. 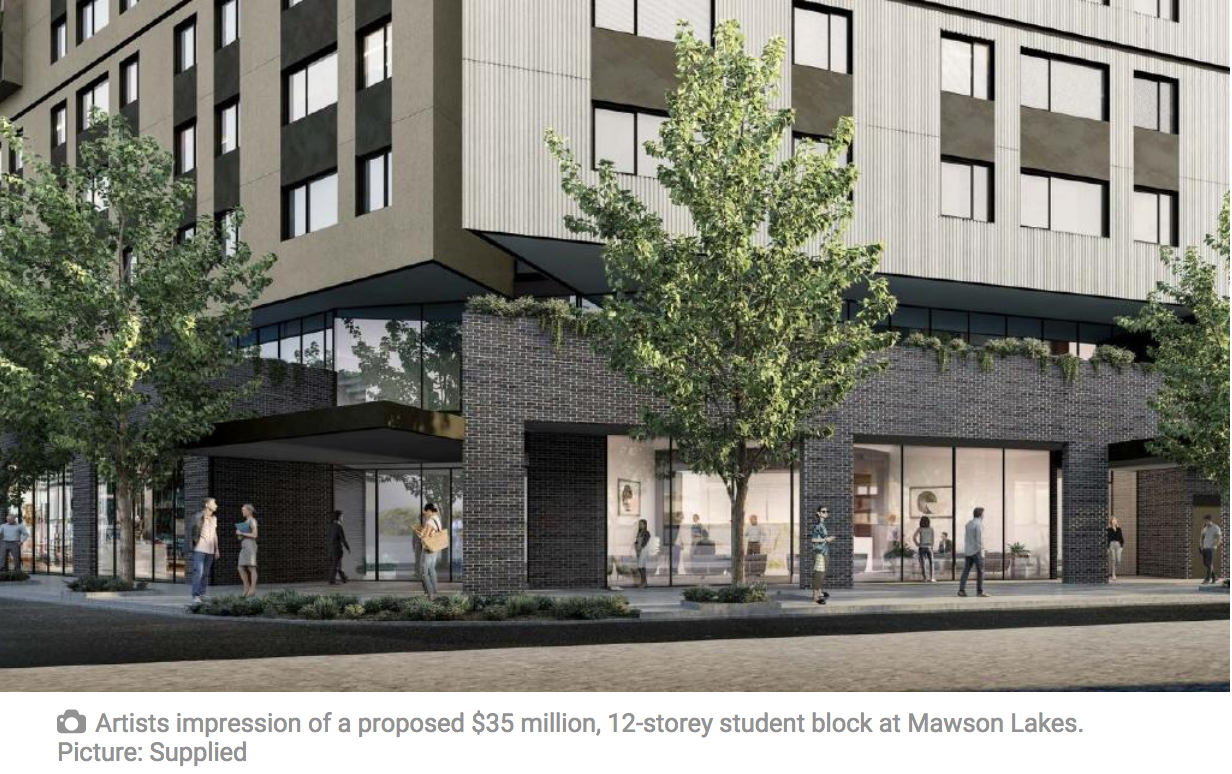 “Indeed, many of the students who study at the University of South Australia’s Mawson Lakes Campus reside within the confines of the CBD and are forced to commute to Mawson Lakes on a daily basis simply because the area is bereft of suitable accommodation.”

Future Urban said a study last year found there were 4590 student beds in the CBD but only 300 in Mawson Lakes – of which 212 belonged to Mr Calabro in another student apartment block he had built on Capital St.

“It is abundantly clear, therefore, that there is a significant shortage of and a demonstrated need for purpose-built student accommodation, particularly within the Mawson Lakes area,” said the report.”

Salisbury Mayor Gillian Aldridge said the council had made a submission to SCAP “as the relevant assessment authority for this application”.

‘Council staff under delegation have provided a response for consideration by SCAP, which references the matters that are considered relevant to SCAP’s assessment of the proposal against the provisions of the Salisbury Development Plan,” she said.

“The comments broadly support the intent of a high density student accommodation development on the subject site that will increase population in this locality and further activate the precinct.

“Council’s response also flagged that SCAP should give consideration to some design elements, adequacy of car parking, and public realm matters including traffic movements, in its assessment of the proposal.”

Public submissions on the proposal close on June 5.

I hope it happens, Mawson Lakes has always been void of vibrancy. A perennial challenge of the suburb has been providing enough entertainment/reason to keep people on site.
Our state, our city, our future.

All views expressed on this forum are my own.
Top

Interesting to see Renewal SA are selling the land at Mawson Lakes that includes most of the bus interchange and all the car parking. I gather various easements and Land Management Agreements will be in place to ensure ongoing public access. I presume a developer will do some form of commercial and residential development on top of the site. Definitely be a first for Adelaide at last having such development literally on a train station's door step.

Modbury_Man wrote:Interesting to see Renewal SA are selling the land at Mawson Lakes that includes most of the bus interchange and all the car parking. I gather various easements and Land Management Agreements will be in place to ensure ongoing public access. I presume a developer will do some form of commercial and residential development on top of the site. Definitely be a first for Adelaide at last having such development literally on a train station's door step.

I hope there's still a stipulation on the required residential density - it's why the site has been held by Renewal SA for so long. Developers have insofar been unwilling to build on the site for this reason: it would be the most dense location in Adelaide (currently held by the apartment block on the south east corner of Colley Terrace and ANZAC Highway in Glenelg).
Our state, our city, our future.

All views expressed on this forum are my own.
Top

Is the parking there currently ticketed?
Top

I wonder what the conditions are on the developer. The listing says that "Current parking/services must be maintained" which for the bus interchange seems fine, but when it comes to parking it would seem almost impossible for any development to keep the current parking arrangements. Even if they were to keep that number of free parking spaces and then build a development over it, you would see more demand for those spaces.
Top
Post Reply
669 posts

Users browsing this forum: No registered users and 4 guests